March 31, 2016
Success Barriers
Ben Austin
The #1 BrainBlock To Avoid At All Costs

The the other day I was in deep conversation with a friend who’s a business strategist, marketing guru and fellow podcaster. I was telling him about the vision for my soon to be released podcast, my goals and my struggles with creating the show.

He asked “What’s blocking you achieving all of your goals for the podcast?”

Immediately my head flooded with all the normal excuses and negative thought patterns -- I’m not good at talking, the title sucks, the theme is bad, it’s not clear, the headline needs to grab attention, my intro is weak, it won’t be good enough, people won't listen to it, i’m an impostor, and who would want to be on my show?

Finally, I stopped -- recognizing the ego based thoughts, paused and took a deep breath and said “Nothing. I just need more reps.”

Our conversation reminded me of a passage from Black Box Thinking. Here it is:

This passage reminded me that I had fallen squarely into ‘the quality’ (perfectionist) group and it was blocking me from creating the show.

Mastery Is an “S” Shaped Curve

Because I had set such high standards the podcast, my criteria for success was too high for me to achieve it and the gap between what i want and what i can do now, forced me into inaction. When starting anything new, logic follows that you won’t be very good. In fact, you’re going to need to allow time to work out the kinks, make iterations, change, be dynamic and grow.

Let’s examine the mastery “S” curve from George Leonard's Mastery, because it perfectly illustrates this point. 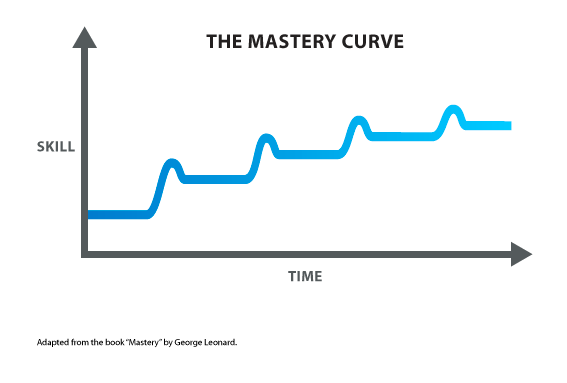 Leonard says when you're starting anything new, you're skill level is going to be low, which mean's you'll be imperfect and make mistakes. The best way to get through this phase is to release or start even before you are "ready". You're going to make mistakes whether you're early or late, so you might as well be early. The Founder of LinkedIn Reid Hoffman said it best when he said: “If you are not embarrassed by the first version of your product, you've launched too late.“

Think Reps and Time Under Tension. Not Perfection.

In the world of fitness and bodybuilding one of the drivers of muscle growth (hypertrophy) is caused by the amount of time your muscles are in a state of exerting force on an opposing weight.

Your expertise in any new subject, job, endeavor and skill grows the the same way.

Practical Applications for Reps and Time Under Tension

It’s not just the world of pottery and podcasting where repetitions and time under tension matter. It’s everywhere...

Music - If you want create a best selling album, you could record and re-record your tracks until you’re blue in the face. Or you could release your mixtape, get feedback, consistently work on it, release again and see what happens.

Fitness - If you want a body that makes heads turn, you could spend thousands on magic pills, read every fitness magazine on the planet and scheme out the perfect exercise and diet plan. Or every single day, you could eat high quality nutrient dense food, eat less carbs, do resistance training, move a few times a day and eventually achieve a body that you’re happy with.

Business - If you want to be a visionary entrepreneur, you could read everything about Steve Jobs, watch hundreds of hours of Shark Tank and talk about your big ideas with your friends. Or you could get a few customers, release a minimum viable product and revise until your product stands out.

Communication and Public Speaking - If you want to become transformative public speaker, you could watch every Ted talk, read about all of the philosophies of speakers and imagine yourself standing onstage at the Grammy’s. Or you could join toastmasters and take improv classes until you’re comfortable in front of an audience.

Love and Relationships - If you want to find that special someone, you could create a list of 33 “must have” criteria for your perfect mate, including income, height, looks, education, age and ethnicity. Or your could embrace vulnerability, lower your shields, go out a few days/nights a week and see if you have a genuine connection with someone.

The reason our perfectionist tendencies overwhelm our brains is because we compare where we are today, to where we want to be in the future. We let our high standards force us to be overly concerned with the end result, instead of focusing on the slow process of getting there.

It’s not about the perfect outcome you want. It’s about the person you become from showing up every single day and getting .001% better.

Perfectionism forces you to choose between perfection or Nothing. Unfortunately, most of the time we will choose Nothing because it’s easier.

The bad thing about Nothing, is that nothing happens when you do Nothing.

The Book That Inspired This Article 'Black Box Thinking'

Get it physical book on Amazon or e-book on Kindle

IF YOU LOVED THIS ARTICLE, SIGN UP FOR MY FREE NEWSLETTER BY CLICKING HERE!